I saw yesterday live the Apple keynote on the WWDC. I am far from an Apple developer, but I use OS X and iOS everyday, and I’m interested on new stuff. There was a full section devoted to developers, which is great (well, it’s supposed to be a developer’s conference, after all), and, arguably, the most interesting stuff on that part (for a developer’s perspective) was the release of a new programming language, Swift.

It was announced with an (irrelevant) comparison with Python in terms of speed (I actually have plans to write a post about “why Python is not really slow“, but I digress), as well as a lot of other details that (IMO) are completely pointless in terms of what makes a good or bad programming language. 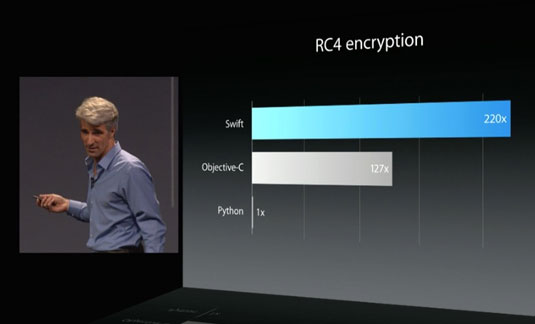 Most pointless benchmark ever

I am generally skeptic about the announcement of new languages. Almost as much as new web frameworks. Sure, it adds a new flavour, but I’m not that sure about real advancement in tech. Creating a new language, full with proper “clean and beautiful” syntax is not really that difficult. The difficult part is to create a vibrant community behind it, one that loves the language and works to expand it, to push the boundaries of current tech, to make amazing applications and tools, to convince other developers to use it and to carry on the torch. The target of a language are developers. “End customers” couldn’t care less about how the guts of their products are done. “Ruby sharp? Whatever, I just need that it help us increase our sales“

Interestingly enough, languages get a lot of character from their communities, as they embed their values on the relevant modules and tools. A great example of that is “The Zen Of Python“. There’s nothing there about whitespaces, list comprehensions or classes, but it reflects a lot of the ideas that are common on the Python world, values of the Python Community. Using a language is not just writing code, but also interacting with other developers, directly or even just reading the documents and using the APIs.

As mandatory as honor

Obviously, Apple is a very special situation, as it can force developers to use whatever they like for their platform. Hey, they managed to create an Objective-C ecosystem out from nowhere, which is impressive. For what is worth, they can even tailor a language for their platform, and not to worry about anything else. iOS is a platform big enough for devs to have to learn the language and official IDE and use it. And I am pretty sure that in this case it will be an improvement over the previous environment.

But the one part that I am most skeptic about is the “visual programming” stuff. One of the “wow” announcements was the possibility of creating “playgrounds”, to show interactively the results of the code. That means that, for example, a loaded image will be available, or that a graph can be displayed showing the results of a function. And that’s the part that I’m not really that sure that is interesting or relevant at all.

Does it look cool? Absolutely. May it be interesting once in a while? Sure. But I think that’s the kind of process that, in day to day operation, is not really that useful in most kinds of programming.

Programming, more than anything else, is creating a mental image of code. Code can be a very complex thing. Especially on a big application. But normally we don’t need to keep the whole code in our mind. We only have to keep certain parts of it, allowing to focus in a problem at a time. That’s the main principle behind modules, classes and other abstractions. I can use OS calls to open a file, to draw some pixels on the screen, or to make a call to a remote server. All of that without having to worry about file systems, graphic drivers or network protocols. And I can also use higher level modules to search on files, create 3d models or make HTTPS calls.

But a lot of that process deals with the unavoidable complexity of the interaction. And being able to move from an abstracted view to a more specific one, to look inside and outside the black box, is crucial. It may not be evident, but the mental process of programming deals a lot with that sudden change in perspective. This is one of the reasons of multiparadigm being a useful thing. Because you can move between different abstractions and levels, using the proper one on each case (especially for leaky ones).

And there are lots of those processes that are not easily represented with graphs or images. They are constructs on your mind: loops, flexible structures, intuitions on the weak points of an algorithm, variables changing values, corner cases… Showing all intermediate results may be detrimental to that quick change in perspective. Too much information.

There has been experiments with visual programming, trying to represent code as visual blocks in one way or another, since a long time ago (at least 25 years). They are useful in certain areas, but they are far from a general solution. There are also interactive notepads to allow easy display of graphs and help with the interactivity. iPython Notebook is an excellent example (and a very similar idea to the playground). But, again, I feel that those are specialised tools, not something that is that useful in most programming contexts.

I’m just skeptic. All of this doesn’t necessarily means that Swift is bad, or that those tools are wrong. Maybe the new X-Code will have a lot of amazing tools that will help create fantastic applications (I still don’t like IDEs, though). There are already people checking the docs and giving a try to the new language.  But I think that it has to show up how good or bad it is for itself, and by the developers that decide to use it. So far, it is just an announcement. I just feel that most that was said on the keynote was not relevant to determine whether it’s a good working environment or not, but was just a gimmick. Yes, obviously these kind of announcements are publicity stunts, but in this particular case it looks especially so.

Looks cool, but is not particularly relevant to how the mental process of programming works or what makes a language good. 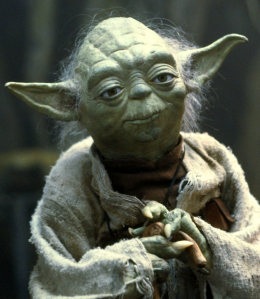