All you need is cache 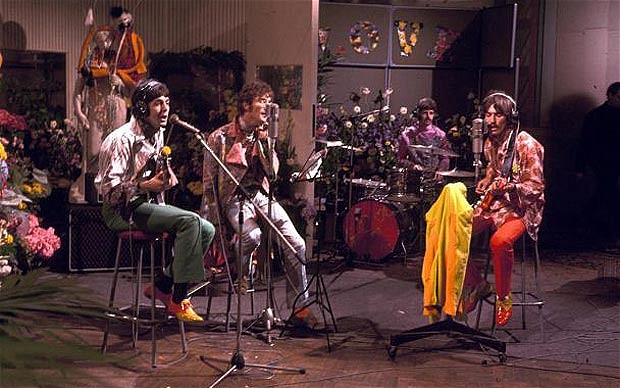 Cache is all you need

More than a formal definition, I think that the best way of thinking about cache is an result from an operation (data) that gets saved (cached) for future use.

The cache value should be identifiable with a key that is reasonably small. This normally is the call name and the parameters, in some sort of hashed way.

A proper cache has the following three properties:

The second one implies that retrieving from cache is useful. If getting the result from the cache is slower (or only marginally better) than from the True Source of Data, the cache can (and should) be removed. A good candidate for cache should be a slow I/O operation or computationally expensive call. When in doubt, measure and compare.

The third property simply warns against storing values that will be used only once, so the cached value won’t be ever used again. For example, big parts of online games are uncacheable because they change so often they are read less times than written.

The humblest cache is a well known technique called memoization, which is simply to store in process memory the results of a call, to serve it from there on the next calls with the same parameters. For example,

This terribly performant code will return the first 100 Leonardo numbers. But each number will be calculated recursively, so storing the result we can greatly speed up the results. The key to store the results is simply the number.

Of course, in this example every cached value never changes, which may not be the case. There’s further discussion about this issue below.

Cache keys deserve a small note. They are not usually complicated, but the key point is that they need to be unique. A non unique key, which may be produced by unproper hashing, will produce cache collisions, returning the wrong data. Be sure that this doesn’t happen.

Just for the sake of being useful, on Python3 there is support for a decorator to cache calls, so the previous code can look like this.

so you can use it instead of implement your own.

In the context of web apps, everyone normally thinks of memcached when thinks of cache.

Memcached will, in this stereotypical usage, use some allocated memory to cache database results or full HTML page, identified by an appropriate unique key, speeding up the whole operation. There are a lot of integrated tools with web frameworks and it can be clustered, increasing the total amount of memory and reliability of the system.

In a production environment, with more than one server, the cache can  be shared among different servers, making the generation of content only happen once on the whole cluster, and then be able to be read by every consumer. Just be sure to ensure the first property, making possible to obtain the value from the True Source of Data at any point, from any server.

This is a fantastic setting, and worth using in services. Memcached can be also replaced by other tools like Redis, but the general operation is similar.

But there are more ways to cache!

Assuming a typical distributed deployment on a production web server, there are a lot of places where a cache can be introduced to speed up things.

This described service will have one DB (or a cluster) that contains the True Source of Data, several servers with a web server channeling requests to several backend workers, and a load balancer on top of that, as the entry point of the service.

Typically, the farther away that we introduce a cache from the True Source of Data, the less work we produce to the system and the most efficient the cache is.

Let’s describe possible caches from closest to the True Source of Data to farther away.

Cache inside the DataBase

(other than the internal cache of the database itself)

Some values can be stored directly on the database, derivating them from the True Source of Data, in a more manageable way.

A good example for that are periodic reports. If some data is produced during the day, and a report is generated every hour, that report can be stored on the database as well. Next accesses will be accessing the already-compiled report, which should be less expensive than crunching the numbers again. 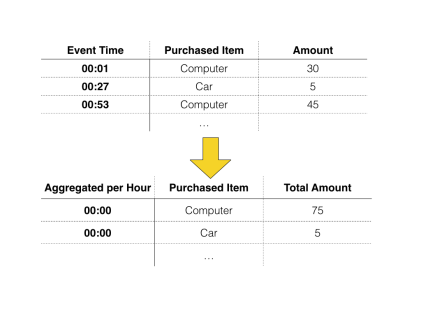 Another useful way of caching values is to use replication. This can be supported by databases, making possible to read from different nodes at the same time, increasing throughput.

For example, using Master-Slave replication on MySQL, the True Source of Data is on the Master, but that information gets replicated to the slaves, that can be used to increase the read throughput. 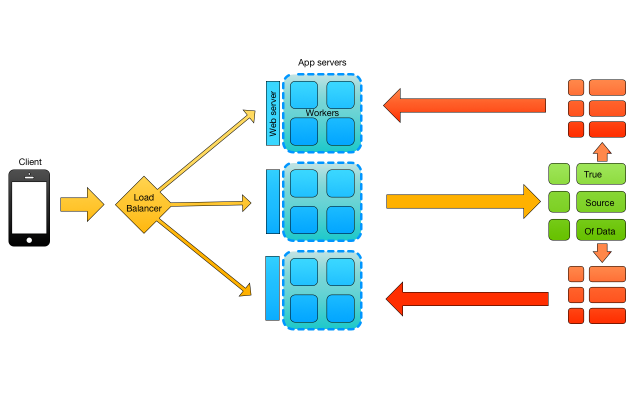 Here the third property of cache shows up, as this is only useful if we read the data more often than we write it. Write throughput is not increased.

Cache in the Application Level

The juiciest part of a service is normally in this level, and here is where the most alternatives are available.

From the raw results of the database queries, to the completed HTML (or JSON, or any other format) resulting from the request, or any other meaningful intermediate result, here is where the application of caches can be most creative.

Memory caches can be set either internally per worker, per server, or  externally for intermediate values.

Another possibility worth noting in some cases is to cache in the hard drive, instead of RAM memory. Reading from local hard drive can be faster than accessing external services, in particular if the external service is very slow (like a connection to a external network) or if the data needs to be highly processed before being used. Hard drive caches can also be helpful for high volumes of data that won’t fit in memory, or reducing startup time, if starting a worker requires complex operations that produces a cacheable outcome.

Cache in the Web Server

Widely available web servers like  Apache or Nginx have integrated caches. This is typically less flexible than application layer caching, and needs to fit into common patterns, but it’s simple to setup and operate.

There’s also the possibility to return an empty response with status code 304 Not Modified, indicating that the data hasn’t changed since the last time the client requested the data. This can also be triggered from the application layer.

Static data should be, as much as possible, stored as a file and returned directly from the web server, as they are optimised for that use case. This allows the strategy of storing responses as static files and serve them through the web server. This, in an offline fashion, is the strategy behind static website generators like Nikola or Jekyll.

For sites that deal with huge number of requests that should return the same data, like online newspapers or Wikipedia, a cache server like Varnish can be set to cache them, that may be able to act as a load balancer as well. This level of cache may be done with the data already compressed in Gzip, for maximum performance.

Cache in the Client

Of course, the fastest requests is the one that doesn’t happen, so any information that can be stored in the client and avoid making a call at all will greatly speed an application. To achieve real responsiveness this needs to be greatly taken into account. This is a different issue than caching, but I translated an article a while ago about tips and tricks for improving user experience on web applications here.

The elephant in the room when talking about cache is “cache invalidation”. This can be an extremely difficult problem to solve in distributed environments, depending on the nature of the data.

The basic problem is very easy to describe: “What happens when the cache contains different data than the True Source of Data?”

Some times this won’t be a problem. In the first example, the cached Leonardo numbers just can’t be different from the True Source of Data. If the value is cached, it will be the correct value. The same would happen with prime numbers, a calendar for 2016, or last month’s report. If the cached data is static, happy days.

But most of the data that we’d like to cache is not really static. Good data candidates for being cached are values that rarely change. For example, your Facebook friends, or your schedule for today. This is something that will be relatively static, but it can change (a friend can be added, a meeting cancelled). What would happen then?

The most basic approach is to refresh periodically the cache, like deleting the cached value after a predetermined time. This is very straightforward and normally supported natively by the cache tools, like allowing to store a value with a validation date. For example, assuming the user has a cached copy of the avatars of friends locally available, only ask again every 15 minutes. Sure, there will up to 15 minutes where a new avatar from a friend won’t be available, and the old one will be displayed, but that’s probably not a big deal.

On the other hand, the position on a leaderboard for a competitive video game, or the result on a live match in the World Cup is probably much more sensible for such a delay.

Even worse, we’ve seen that some options involve having more than one cache (cache per server, or per worker; or redundant copies for reliability purposes). If two caches contains different data, the user may be alternating between old and new data, which will be confusing at best and produce inconsistent results at worst.

This is a very real problem on applications working with eventually consistent databases (like the mentioned Master-Slave configuration). If a single operation involves writing a value, and then read the same value, the returned value could have a different value (the old one), potentially creating inconsistent results or corrupting the data. Two very close operations modifying the same data by two users could also produce this effect.

Periodically refreshing the cache can also produce bad effects in production environment, like synchronising all the refresh happening at the same time. This is typical in systems that refresh data for the day at exactly 00:00. At exactly that time all workers will try to refresh all the data at the same time, orchestrating a perfectly coordinated distributed attack against the True Source of Data. It is better to avoid perfectly round numbers and use some randomness instead, or set numbers relative to the last time the data was requested from the True Source of Data, avoiding synchronised access.

This avalanche effect can also happen when the cache cluster changes (like adding or removing nodes, for example, when one node fails). These operations can invalidate or make unavailable high numbers of cached content, producing an avalanche of requests to the True Source of Data. There are techniques to mitigate this, like Consistent Hash Rings, but they can be a nightmare if faced in production.

Manually invalidating the cache when the data changes in the True Source of Data is a valid strategy, but it needs to invalidate the results from all the caches, which is normally only feasible for external cache services. You simply can’t access the internal memory of a worker on a different server. Also,  depending on the rate of invalidation per read cached value, can be counter productive, as it will produce an overhead of calls to the cache services. It also normally requires more development work, as this needs a better knowledge of the data flow and when the value in the cache is no longer valid. Sometimes that’s very subtle and not evident at all.

Caching is an incredibly powerful tool to improve performance in software systems.  But it can also be a huge pain due all those subtle issues.

So, some tips to deal with cache